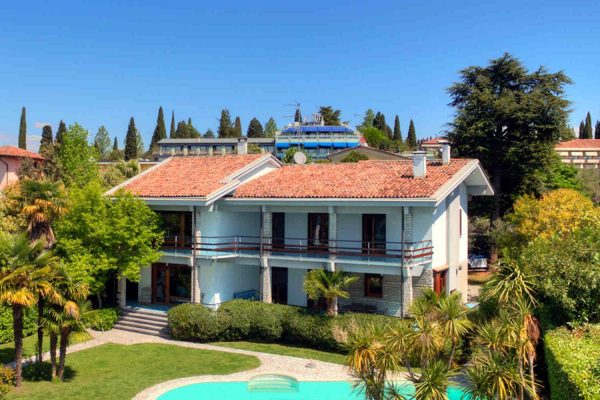 Villa Sirmione for sale in unique lakefront position, with large garden, pool, private dock, and well of Sirmione’s thermal water. The villa is located in the historic center of Sirmione, towards the end of the peninsula, with a southern exposure and directly facing Lake Garda with an amazing view over the Gulf of Desenzano and unforgettable sunsets. Contact us for a viewing!

The villa Sirmione consists of:

The whole villa, which was built from 1958-160, has been restored numerous times over the years. About 4 years ago all the electrical systems and bathrooms were redone, trying to preserve the style of the construction period.

The house, which is furnished with original custom-made mogils of the time, is equipped with a heating system with cast iron radiators and independent methane gas system, split air conditioning and heat pumps in the bedrooms.

The villa has large terraces both on the mezzanine and on the first floor, completely covered.

The large garden, partly facing the lake and partly on the side of the entrance to the villa, is complete with an irrigation system. On the lake front there is a free-form swimming pool but with a length of 12 meters with a hydromassage relaxation area.

The slide which leads directly to the lake can be transformed into a small pier used to enter and exit the water. In addition, the villa has a dock with demaial concession, in which there is an already approved restyling project to build a new dock with a long wooden pier to track the boats.

The villa has a private well of thermal water that flows at a temperature of about 45 degrees centigrade.

Due to its stunning natural position, the peninsula of Sirmione has always been a favorite holiday location of noble and wealthy families, including the family of the Roman poet Catullus, two thousand years ago praised the beauty of Sirmione, where he owned a magnificent Roman villa just on the tip of the peninsula, which today is an important archaeological site and bears witness to the long residential tradition Sirmione. From the time when Caesar refreshed at the Valeri house before continuing to the conquest of Gaul, Sirmione is a coveted oasis of beauty and relaxation for its famous thermal baths, the beautiful Castle at the unique geographical position.

Lake Garda is the largest and, undoubtedly, the most evocative lake in Italy. For centuries Lake Garda attracted noble families and a high-class tourism, and not coincidentally has been praised by numerous poets, including Catullus, Johan Goethe and Gabriele D’Annunzio, who lived there and many times they described admired the wonders of the landscape, the constant mild climate and the genuineness of the wine and food resources. Lake Garda has for centuries been the preferred destination of noble families and historical figures, including Catullus, Frederick Barbarossa, Napoleon, the King of Italy Vittorio Emanuele II of Savoy, Johann Wolfgang Goethe, Gabriele d’Annunzio, Winston Churchill, Maria Callas and many other eminent personalities who have chosen to live on the gentle shores of Lake Garda to enjoy the relaxation and its spectacular scenery.