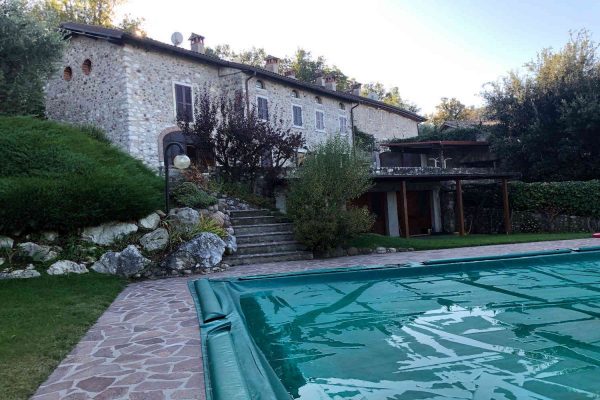 Those who know the real estate market of Lake Garda know that there are very few country houses for sale. If you then consider that this one has got lake view, it has already been restored and has a beautiful garden with swimming pool, it is easy to understand that this is a unique opportunity. Ask for a viewing for this country house Lago di Garda!

This country house Lago di Garda for sale has been restored by the current owners who have divided it into three independent apartments. Each apartment has on the ground floor a living room, kitchenette and a guest bathroom. On the first floor there is a double bedroom, a single bedroom and a bathroom. In the attic there is another double bedroom and its bathroom. Consequently, the cottage in total comprises:

This country house Lago di Garda has a beautiful garden of about 1,000 square meters, with a splendid 12 x 6 m swimming pool. and a barbeque area where you can organize wonderful barbecues with friends, and then dine by the pool.

Bardolino, one of the gems of Lake Garda, is a town on the Veronese shore of Lake Garda. It is famous for the homonymous wine that is produced on its hills. The countryside is very beautiful, with its rolling hills covered with vines, flowering plants, tall cypresses and, above all, olive groves. In fact, Bardolino is also renowned for its excellent extra virgin olive oil. Bardolino, like most of the towns on Lake Garda, shows traces of pre-Roman and Roman settlements. For example, in the nearby small hamlet of Cisano, numerous archaeological traces of a prehistoric fishing settlement have been found. The city is charming, with many cafes, restaurants and numerous stone streets with pretty buildings. Ask for a viewing for this country house in Bardolino!

For centuries, Lake Garda has attracted wealthy families and illustrious personalities from all over the world. Already 2000 years ago the ancient Romans were struck by the extraordinary beauty of Lake Garda. Witness the “Grotte di Catullo”, the remains of the villa of the Roman poet Gaius Valerio Catullo on the Sirmione peninsula. The German writer and poet Wolfgang Goethe was also literally in love with Lake Garda and described it in numerous works by him. In addition, Archduchess Maria Theresa of Habsburg and Princess Sissi of Austria also stayed at Lake Garda, who had a splendid lakefront villa in Lazise del Garda. Among the many other personalities who have changed history who have loved Lake Garda we can mention the English Prime Minister Winston Churchill, Napoleon Bonaparte, King Vittorio Emanuele I with his wife Maria Adelaide, Gabriele D’Annunzio and many others.