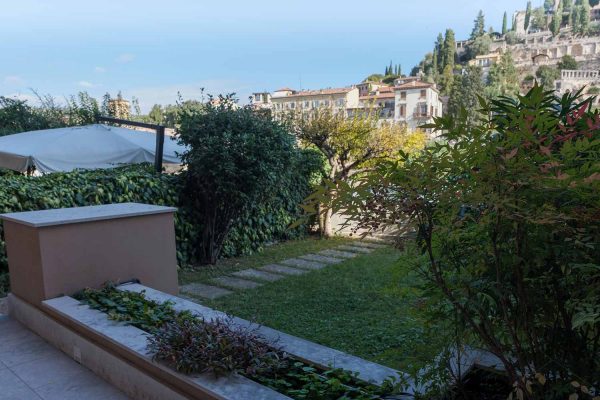 Verona house on the Lungadige for sale, on the banks of the Adige River, with spectacular views of the Roman Theater and Castel San Pietro. One of the most beautiful and evocative houses for sale in Verona.

This Verona house, an entire building located in the historic centre of Verona, is right next to Ponte Pietra in an unobtainable position in Verona, directly on the Adige river. From the garden and from the house, you can enjoy a breathtaking view of Ponte Pietra, the Roman Theater and Castel San Pietro. From this Verona house you can comfortably reach the most beautiful corners of the historic centre of Verona. The house is only a few minutes walk from Piazza Erbe, Via Cappello and Via Mazzini.

Those who know Verona know that it is a real rarity to find an entire building for sale on the Lungadige, right next to Ponte Pietra and in front of the Roman Theater and Castel San Pietro. This Verona house is a unique opportunity for true connoisseurs.

Ask for a viewing.

The Verona house consists of a three-storey building plus a basement. The property has a splendid private garden that directly overlooks the Adige river, from which you can enjoy an incredible view of Ponte Pietra, the Roman Theater and Castel San Pietro.

Ground floor:
Entrance;
Guests bathroom;
Study / office which can be converted into a garage (as the neighbors did too);
Living room, with retractable kitchen, with French doors which lead to the garden.
First floor:
Living room with fireplace, with French windows which lead to the small terrace overlooking Ponte Pietra, the Teatro Romano and Castel San Pietro;
Kitchen.
Second floor:
Master bedroom with en-suite bathroom;
Walk-in wardrobe;
2 bedrooms;
Bathroom.
Third floor:
Large open-space room in the attic, in which it is possible to obtain a fourth bedroom with bathroom, or a study/office with bookcase.
Basement:
First room, in which it is possible to create a luxurious tavern with fireplace and temperature-controlled wine cellar (please see rendering);
Second room, in which it is possible to create a SPA & Wellness area with a heated indoor pool, sauna, emotional showers and gym (please see rendering).

Ask for a viewing.

Ponte Pietra dates back to over 2000 years ago when its foundations were laid by the Romans. While Gaius Julius Caesar led Rome, Verona represented a strategic centre for the Western Empire. Today, in the heart of the historic centre of Verona, close to Ponte Pietra, is Via Ponte Pietra, in which there are still magnificent buildings built on ancient Romanesque stones, subsequently enlarged in the Middle Ages and then in 1800. It is one of the most evocative and refined of Verona.

Verona is famous worldwide as the city of love and of Romeo and Juliet, the characters of Shakespeare’s play. In fact, in Via Cappello (a few steps from Ponte Pietra and this splendid house for sale), a 16th-century building houses the “Juliet’s house”, with a delightful balcony overlooking a courtyard. The Arena di Verona hosts concerts and operas, a large, beautifully preserved first-century Roman amphitheatre. Not everyone knows that Verona is the second city after Rome for the quality and quantity of Roman archaeological finds. Right in front of this house for sale is the ancient Roman Theater, built in the 1st century BC. at the foot of Colle San Pietro. In this theatre, during the summer, numerous concerts and theatrical performances take place. Verona has a unique historic centre, declared a “World Heritage Site” by Unesco for its extraordinary architecture and romantic and suggestive urban structure. Verona has numerous jewels to admire: Piazza Bra and the Arena, Piazza Erbe, Via Cappello and Juliet’s House, the Lamberti Tower, the Scaliger Arches, Porta Borsari, Castelvecchio and the Civic Museum of Verona, the Cathedral of Verona and the church of San Zeno.